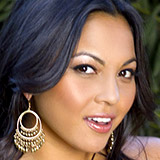 She joined the adult industry in 2011 and has already appeared in more than 80 pornographic films. She was chosen as the Penthouse Pet of the Month for November 2012. Adrianna also won the Nightmoves Award for Best New Starlet 2012 as a result of her high energy acts of sexual satisfaction and we expect many more accolades to her honor in the future.