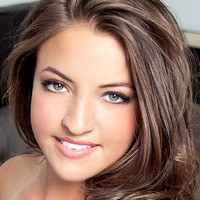 Jessica Workman is a hazel-eyed hottie from Cleveland, Ohio. She was born on February 12, 1992 and made her debut as an adult model in 2010. She was chosen as the Playboy Cybergirl of the Month for August 2012.

The busty brunette vixen stands 5’7″ and has a knockout 34D-25-36 all-natural figure. She is an Aquarius with an alluring stare and sweet smile.

A classy nude dream girl, Jessica is a surefire way to entice your senses and have you feeling enthusiastic for every new image. She brings a friendly heat to all of her shoots. She is inviting as well as sizzling with sex appeal.