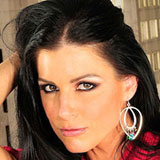 The all-natural native of Des Moines, Iowa was born April 26, 1976 and the stars must have been aligned just right that day, because she has grown to be a goddess among mortals.

Once you have watched India in explicit hardcore action, you will want to watch her again and again!