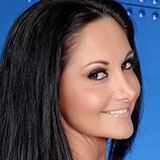 Ava Addams was already a naturally busty beauty with a legion of adoring fans before having her breasts augmented to 34DD in the summer of 2012, but now she has become an even more unstoppable force of womanly sexuality ready to explode in climactic decadence in every scene.

Ava was born September 16, 1979 in Gibraltar, but is the daughter of French parents. Since her adult industry debut in 2008, she has traveled all over the world and landed pages in international magazines and appeared on countless websites.

Ava Addams is in demand and it is easy to see why. The 5’3″ brown-eyed brunette is insatiable and every body wants her.