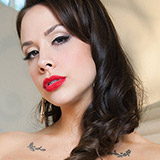 For a girl that started out as just a stripper in Hawaii, Chanel Preston isn’t doing too bad for herself in the adult industry. She was turned on to the film side of things by a former film star who thought she’d be great at it.
Guess they were right!