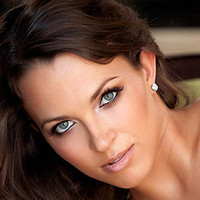 Lily Love feels empowered by her sexuality. She thrives in front of the camera and especially during her hardcore scenes. The D-cup dream babe obviously loves her work and proves it in every performance.

Born October 2, 1984 in Hungary, Lily first took off her clothes for the camera in 2002 at the just legal age of 18. She has worked hard in the industry and performed in more than 130 pornographic films. She also earned the distinction of being named the December 2012 Penthouse Pet.