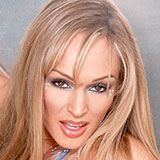 Drawn to debauchery with a sexual curiosity that fueled the fire within her, the 5’5″ 36DD-23-35 knockout found the life of an adult entertainer far more satisfying than anything else she had ever experienced and so she went with it and is still rocking the industry more than a decade later.