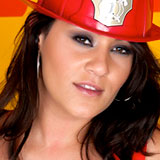 Charley Chase has been in over 200 adult films, so there’s a pretty good chance you’ve come across some of her work. This 24 year old siren can’t get enough sex and her insatiable sexual appetite is seen on screen! She’s into just about everything – girls, boys, bondage, and for those kinky times – even a little watersports.

In 2011 the brunette beauty won an AVN award for Unsung Starlet. With an away like that under her belt, there’s more than a good chance that we’ll be seeing much more of this fox in the future!