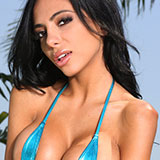 That something special about this Cuban American actress landed her a contract deal with ClubJenna only a year after she started her adult career. This lil cutie with the rack of gold had everything going for her.

Late 2011 she announced she was retiring from the industry, but thankfully for us, these pictures and films of Lela will live on eternally.