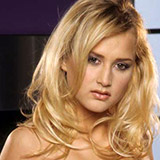 Paris Dahl, also known as “Paris Doll” may have only been in the business from 2005 – 2008 but she sure made her mark while she was in business.

She did rather well in three years in the industry, even Penthouse made her a Pet.