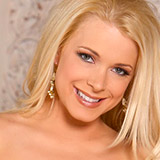 Sydney Moon is known not only for her all natural 32D’s but for the extensive work she did for Playboy. Her first modeling gig was with Playboy and she was lucky enough to get callback after callback from them. Not many girls can say that!