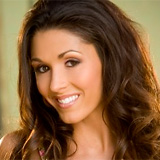 Taya Parker is on a roll. She is the 2009 Penthouse Pet of the Year and drew national mainstream attention as a contestant and winner of VH1’s Rock of Love Bus with Bret Michaels. Taya also maintains a full-time feature entertainer schedule and has toured throughout North America. Her floor and pole skills resulted in her winning the 2007/2008 “Entertainer of the Year” award. Yep, she is definitely one talented and busy girl.

Taya is originally from Marion, Ohio and a fervent Pittsburgh Steelers fan. In addition to her VH1 and Penthouse showcases, she has also appeared on the pages of Playboy, segments on The Insider, and rumor has it, has a few other “projects in the works.”