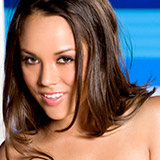 Kristina Rose is one of those nasty brunettes hat once you see in action, can’t get her out of your head. She’s a tiny little thing, standing only 5’1″, weighing 110 lbs, and with a natural chest size of 34A. Her small stature surely hasn’t gotten in the way of her career!

This cutie has multiple AVN’s such as Best Couples Sex Scene 2011 and Best Three Way Sex Scene 2012. She delivers just as big a bunch as anyone else in the business – but she must be doing something better to have all those AVN’s backing her up!