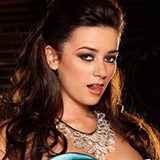 Taylor Vixen is one of the lucky women in the business to obtain two of the ever coveted spots in Penthouse. In 2009, she became Penthouse Pet for September. The next year, she topped that honor by becoming Penthouse Pet of the year for 2010. She followed that up in 2012 by being named Twistys Treat of the Year. Taylor also has a few AVN nominations under her belt for some of her girl-on-girl scenes.

Talylor’s career mainly focuses in glamour and nude modeling, solo girl scenes, and the occasional lesbian scene. No matter what your flavor is, this is one of the tastiest babes out there!