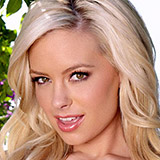 Lacey Foxx is a busty blonde beauty who never looks anything less than perfect. Knowing that, it is no surprise that her first job and only job she has ever had outside of modeling was as a stylist. She put those skills to use when she became a webcam model and it didn’t take long before her large fan following got her noticed and she soon had her own solo site.

From a small town in Colorado, Lacey found herself bored with cutting hair and knew that her hot 5’4″ 34D-26-34 body could be her ticket out. She eats healthy and works out to keep herself in such fine condition. Her hard work is rewarded with a career she loves and trips to visit places she never thought she would have the opportunity to see in person.